Dear readers, this is the last topic of three articles about electrostatic fields. In the first one I wrote about strategies for water condensation, and the second one was about natural electrostatic fields on plants. This article is about my own research where I investigated, if plants can actually condensate atmospheric water vapour on the surface of their leaves by using electrostatic charging.

Mainly because of its extraordinary shape I chose Cyperus papyrus L. as a role model. It is a tropical freshwater plant growing in swamps largely restricted to areas of eastern and central Africa [Sculthorpe, 1967]. The stems are growing up to 5 m high and are composed of several hundred rays, each of which extends into 3-5 flattened bracteoles [Raynal, 1971]. When touched, the bracteoles seem quite rough, which made me think that this could already be attributed to surface charging caused by friction (like in the case of an electrostatic duster made of plastic that you may know). The mentioned mechanism and the surface structure had to be investigated in order to confirm the hypothesis that papyrus plants can condensate water vapour via electrostatics. 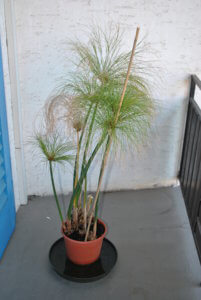 My hypothesis was that such phenomenon could be used in the plant’s strategy to create a water layer on the surface of the bracteoles to reduce the water pressure gradient with the surrounding air. This would prevent early stomatal closure with reduced photosynthesis rate. Another advantage for the plant could be that it regulates the temperature via the cooling effect of the latent heat during water evaporation at daytime.

The first part of my research was dedicated to analyse the structure of the bracteoles. Fluorescent microscopy illustrates different tissues and materials that are forming bracteoles and rays. Fig. 2 represents a cross-section of a ray where a layer of chloroplast (emitting red light) is placed directly under the cuticule (outer layer). Blue emission refers to lignified tissues, in this case the epidermis.

Electrostatic charge measurements were conducted by establishing an experimental set-up as shown in Fig. 3. The plant was placed between two metal plates, one serving as a ground and the other one was collecting charges from the plant. Both electrodes (plates) were connected to a PC with a Matlab software to collect the results. From the values of collected surface charge, it is evident that the charges are small, normally of some nanocoulombs (nC). Plants themselves also do not carry a charge significantly different than the surrounding air even though it can vary in polarity. 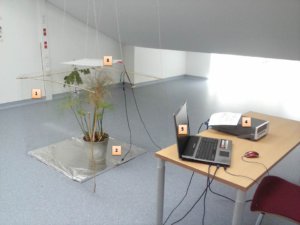 In addition to papyrus, ostrich feathers and plastic dusters were included in this research for comparison. It was observed in all three examples that electrostatic charging by rotating or shaking the feathers or duster does not induce much charge (100-200 nC).

Plant polarization was proven in the vicinity of the Van der Graaf generator with a maximal voltage of 275 kV where Cyperus papyrus experienced a transient charge transfer. The attraction force can be seen in Fig. 5 where individual bracteoles orientated towards the sphere.

Simulations of plant electrostatics were conducted by using the software ANSYS®. The geometries of Papyrus and a reference plant were adapted to a certain degree in order to understand the influence of the geometry to charge distribution.

Collected charges were small in both cases of applied voltages (100 V and 275 kV). The charge polarity occurred as seen in Fig. 6. Plants are not completely isolative, therefore some charges concentrate on the surface (blue colour). The charge of opposite polarity is induced on the lower side (red colour). Rays of papyrus plant are much thinner and such effect is not so obvious. In case of a conductive material, there would not be any charge collection.

In this research, electrostatic charging of Cyperus papyrus was studied in order to reveal its possible mechanism for water condensation. Analysis of plant physiology shows structural features that enable building-up of electrostatic charge. Charge measurements proved that plants can get statically charged on a nanocoulomb level like other objects applicable for their electrostatics (dusters). Plants carry approximately the same amount of charge as the surrounding air only with the opposite polarity because they are grounded. This is a result of a polarization effect on plants caused by the vicinity of a charged object.

Nevertheless, the principal hypothesis of water condensation due to electrostatics on the papyrus plant is disconfirmed. It is true that charged nuclei in the atmosphere serve as an initial condition for water precipitation but the amount of charge for a much smaller particle size is in coulomb range. Electrostatics on the ground is measured on a nano-scale which cannot provide sufficient charge for water molecules to condense on a much bigger surface. Additionally, no structural features on bracteoles that would facilitate collection of water condensation were found.

To conclude, Cyperus papyrus is truly an interesting plant. Although the hypothesis of this particular research project could be disconfirmed, the plant possesses other features worth of biomimetic interest. It could provide us with ideas for efficient use of solar light and temperature regulation based on its structure and thermodynamical laws but further research is definitely needed.

Where to study Biomimetics in Europe?

Why is it itchy? A second skin, wool and other fabrics

Living among the algae – the better battery …?

The International Youth Conference of Bionic Science and Engineering (IYCBSE 2021)

On the 7th International Conference of Bionic Engineering (ICBE 2022)

The community is for academic exchange and educational purposes in Bionic Science and Engineering filed. Messages or threads that do not meet the guidelines set up below are subject to removal and/or closure. In addition, members who do not adhere to the rules / guidelines will have their account closed and be banned from the website.
1. No Spam / Advertising / Self-promote in the forums.
2. Do not post copyright-infringing material. Providing or asking for information on how to illegally obtain copyrighted materials is forbidden.
3. Do not post “offensive” posts, links or images.
Any material which constitutes defamation, harassment, or abuse is strictly prohibited. Material that is sexually or otherwise obscene, racist, or otherwise overly discriminatory is not permitted on the forum.